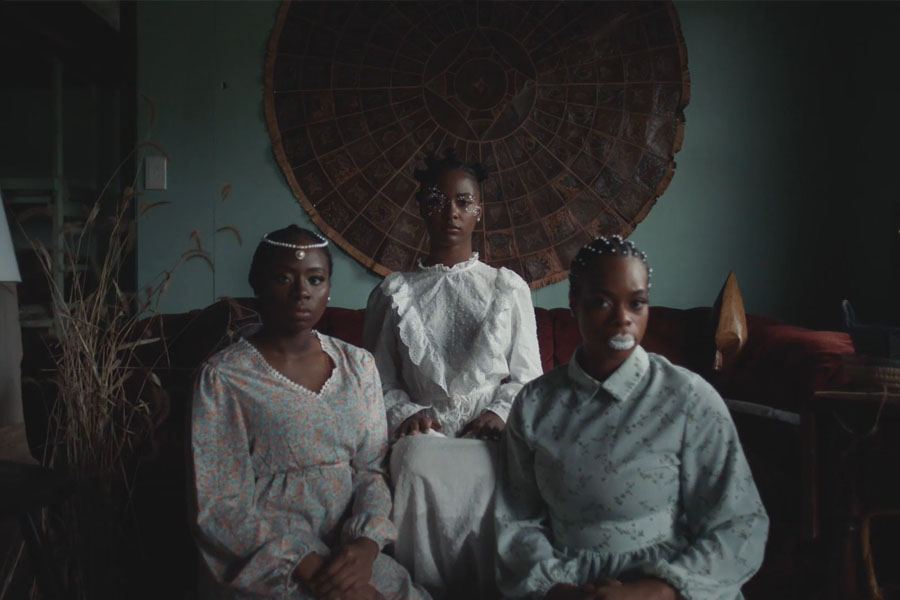 “In a time of destruction, create something.” ― Maxine Hong Kingston

In art, sometimes less is more. Such is the case for these short films that deftly explore massive themes in only a few minutes. Here are the top 5 short films by BIPOC creators to check out this season.

Part satire and part covid confessional, this dark comedic short takes the form of a typical language learning video, enthusiastic instructor included. Yet with each conversational phrase, Kayla’s sunny facade begins to slip. The film is simultaneously hilarious and relatable as unconventional linguistic phrases are paired with retro-style media footage of Kayla’s home life. With a short runtime and a particular brand of dark humor, Learning Tagalog With Kayla is sure to entertain. After premiering at SXSW 2021, Learning Tagalog with Kayla won the Audience Award of the Texas program. After playing Austin, it then went on to be selected at multiple festivals including Aspen Shortsfest and the Palm Springs ShortFest.

“Know what you value in a collaborative space, and then find your filmmaking community and mentors who know your values.”  ― Kayla Abuda Galang on young women looking to break into the film industry as a writer/director

Kayla Abuda Galang is a second-ish generation Filipino American born in Olongapo City, Philippines; raised in San Diego, California; and living and working in Austin, Texas. Her films are deeply rooted in nostalgia, absurdity, and girlhood. Her directorial and editing works have also been official selections at Atlanta Film Festival, Aspen Shortsfest, Austin Film Festival, and Palm Springs International ShortFest. Kayla is currently in pre-production for her next short film, When You Left Me On That Boulevard, shooting in Spring 2022.

Gold Token was inspired by the surge of activism that emerged from the death of George Floyd in 2020. With no dialogue, the film is a visual poem mixing poetry and song exploring massive themes that traditional narrative filmmaking could not contain. Gold Token is a film that explores Black ancestry, tokenism, cyclical pains, and ultimately how society uses the black experience, especially in recent years, as an aesthetical piece for consumption.

“In short, I took my frustrations and compiled them into something I could process creatively, in hopes that viewers could process it too.” ― Ewurakua Twi Dawson-Amoah on Gold Token

Ewurakua Twi Dawson-Amoah is a Black woman of Ghanian descent. She uses stylization in her films as an attempt for authenticity, seeking to portray the deeper truth of the African American experience, both its joy and sorrow. Her work has been recognized in multiple film competitions including the Fusion Film Festival and the Toronto Black Film Festival; she is also a winner of the Tony Hawkins Award for Excellence in Sound Design.

Are You Still There
Rayka Zehtabchi

When her car battery dies in a strip mall parking lot, Safa is forced to confront her suppressed grief. With very few spoken words, and the pressure of tight close-ups, this captivating short is a mix of pain, frustration, anger, and sadness. In only 15 minutes and one set, Are You Still there is a profound exploration of loss that’s both subtle and profound. The film won the best narrative short at the Woodstock Film Festival.

Rayka Zehtabchi is a director working in both documentary and fiction. Her films focus on simple stories that prioritize honesty and intimacy with a naturalistic approach. She is the first Iranian woman to win an Oscar for her 2018 documentary short Period. End of Sentence.

How to Raise a Black Boy
Justice Jamal Jones

Four black boys disappear one night and find themselves on a fairy-tale-like journey to break the curses of black boyhood. How To Raise A Black Boy is an ambitious, mesmerizing narrative that fits a fairytale format onto a collage of identity, American politics, and childhood experiences. The film plays with elements of horror and fashion filmmaking as the story plays out in non-linear chapters exploring a range of themes: the transition from puberty, the loss of a home, the breaking of “the curse of boyhood”.

Justice Jamal Jones is a filmmaker, actor, and writer based in New York City. They have worked in production, creative direction, styling and as talent at Disney on Broadway, Vogue Italia, Paper Magazine, and Maybelline New York. They founded Rainbow Farm Productions, an outfit that started to create a space where individuals can cultivate themselves outside of non-binding standards. Jones is currently working on a feature titled “Crossroad Blues” based on the story of Robert Johnson who sold his soul to the devil to learn how to play the guitar.

An elite squad of government ghosthunters is responsible for containing the supernatural, imprisoning the spirits of the dead on a server called Deadlock. Despite mainstream recognition of ghosts, there’s universal controversy about their management and many disagree with the seemingly inhumane imprisonment practices. What slowly unfolds is a crisis-of-conscience for Riz, one of the lead members of the Deadlock squad, like a traumatic experience, stress in his relationship with his daughter, and mysterious events in the world around him unsettle his faith in the righteousness of his actions.

You know it’s a good short story when 21 minutes feels like it only took 2. We really need more of this story! – Todd Stidham

Aqsa Altaf is a Los Angeles-based filmmaker, director, and writer. She has written, directed and produced many short films as well as interned at production companies like Annapurna Pictures, Plan B Entertainment, and The Kennedy/Marshall Company. Aqsa has also directed commercials for brands like Disney, Amazon and Uber. Currently, she is developing her first feature as well as a TV series based on her short film HEAT with a major studio.