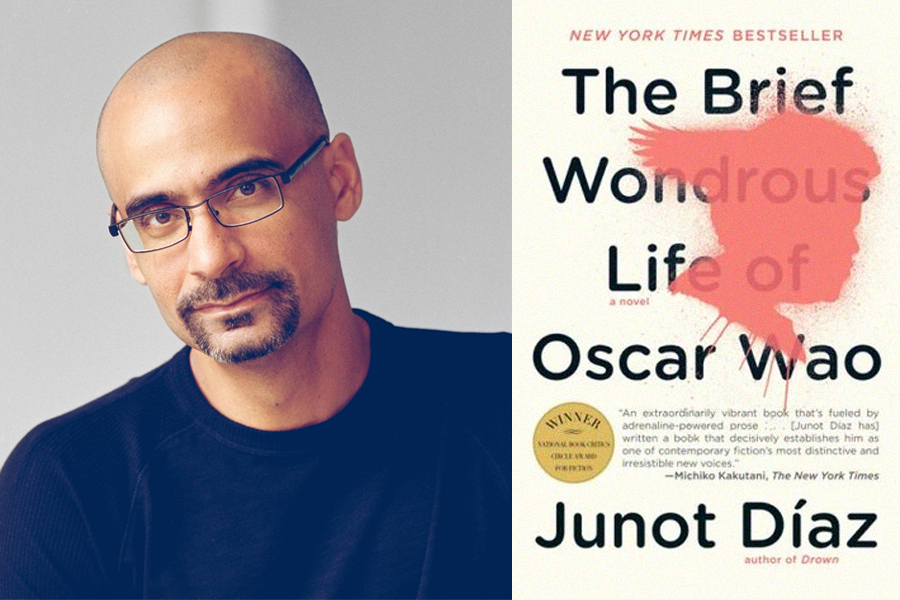 Author, professor, and editor Junot Díaz was born in the Dominican Republic. At the age of six, his family immigrated to New Jersey. Díaz was reunited with his father who worked in the United States to support his family abroad. In the United States, he became a voracious reader, often walking four miles in order to borrow books from his public library. He was fascinated with apocalyptic works like Planet of The Apes and the Edge of Darkness mini-series. Yet he still struggled to learn the English language. While his four siblings seemed to take to the language naturally, while he had to be enrolled in a special education program.

Díaz attended Kean College before transferring and completing his BA at Rutgers University-New Brunswick, majoring in English. Writers Toni Morrison and Sandra Cisneros were his inspiration. During his time as an editorial assistant for Rutgers University Press, Díaz created the semi-autobiographical character Yunior. Yunior became a central figure in Díaz’s work, starring in the short story collection Drown and the novel The Brief Wondrous Life of Oscar Wao.

His novel, The Brief Wondrous Life of Oscar Wao, won the Pulitzer Prize in 2008 and the National Book Critics Circle Award. His most recent short story collection titled This is How You Lose Her was a New York Times bestseller, National Book Award finalist, and Goodreads Choice Award for Best in Fiction.

His works are heavily inspired by his own experiences; as a Dominican growing up in the United States and his own personal relationships with family. His tumultuous relationship with his estranged father is also a pervasive theme in his short story collection Drown.

The violent history of the Dominican Republic and continues to occur daily is another key theme in his works. Known for his spare narrative style, Díaz seamlessly integrates Spanish into his English texts. Díaz himself has described his writing style as “a disobedient child of New Jersey and the Dominican Republic if that can be possibly imagined with way too much education.”

Today, Díaz teaches creative writing at the Massachusetts Institute of Technology as the Rudge and Nancy Allen Professor of Writing. He is also the fiction editor for Boston Review. When not working on other people’s novels, or his own, he is an active member of the Dominican American community.

His activism led him to become a founding member along with award-winning author Elmaz Abinader, Víctor Díaz and Diem Jones of the Voices of Our Nation Arts Foundation. The Foundation seeks to provide emerging writers of color with workshops and mentoring. Since its founding, over 2,000 aspiring writers from around the world have been involved in their programs.